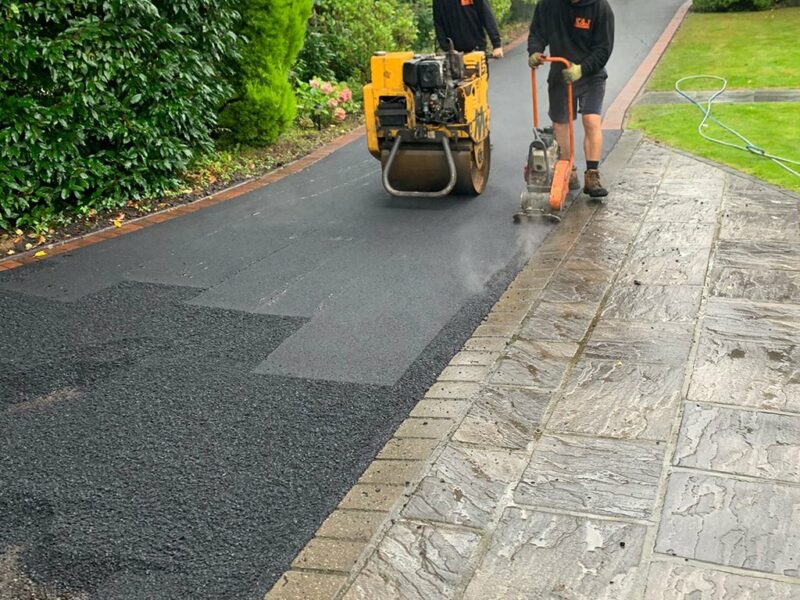 Here is a tarmac driveway installation completed by Toplines Drives and Natural Stone using SMA bordered with a brindle brick around it. We excavated the entire driveway area including the pathways throughout the whole driveway area. We installed new drainage into the driveway for surface water and new recessed covers to remove the old manhole covers.

The new driveway had membrane weed block laid over and was backfilled with a Type 1 MOT foundation which we machine rolled to lock it in place. The brick border which was brindle coloured Marshalls Driveline block paving bricks were installed around the driveway set in a concrete bed.

The new SMA tarmac was laid on top of the base foundation making sure it finished flush with the brick on edge around it and the surface levels set to direct the surface water.

Even though we are based in Crawley, we service a wide around Crawley for installing new drives, patio and natural stone gardens. We provide FREE no obligation estimates.

Public Liability Insurance up to £10 million

Topline Drives and Natural Stone have built an outstanding reputation for laying new driveways and patios. All the work is carried out by our own specialists to ensure a high quality finish on each of our projects.